Beyond Game Design: Common Mistakes Game Developers Make (& How to Avoid Them) 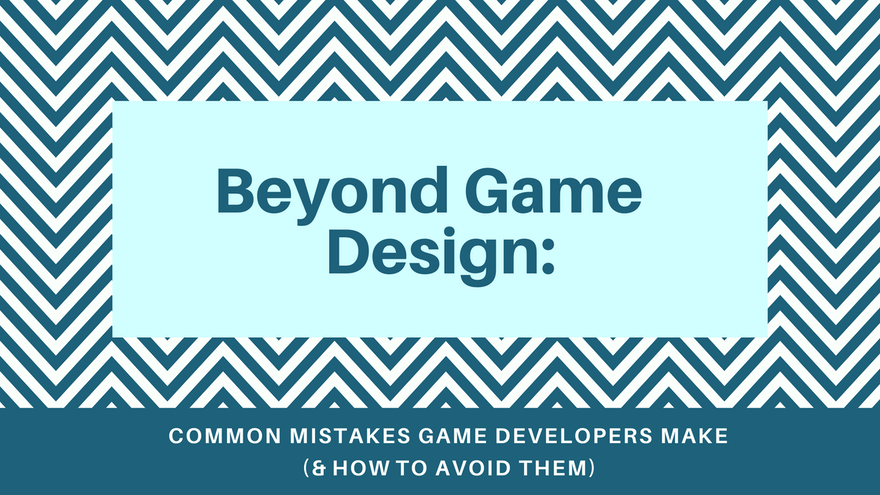 Beyond Game Design: Common Mistakes Game Developers Make (& How to Avoid Them)

We’ve already discussed game development mistakes that developers should avoid at all costs in a previous article. However, our team of game development experts has noticed some other common, recurring mistakes that, while seemingly insignificant at first glance, could seriously impact your game’s ability to attract and retain players and become profitable.

To help you create the best game possible, here are four common mistakes we’ve seen game developers make and steps you can take to avoid them.

4 Common Mistakes (& How to Avoid Them)

New game developers are often shocked to find how much it costs to maintain and support a game. All games require ongoing support in one form or another, and underestimating this burden (including the amount of time required, the number of developers required, and how much it will cost to pay those developers and cover other related expenses) can quickly impact your bottom line.

We sat down with our CEO Jon Radoff to discuss this common issue, and he said the average game re-invests about 20% of its game revenue into supporting game operations. As such, we strongly suggest that all game development teams either:

Outsourcing has the added benefit of freeing up development resources to focus on the art of gameplay, which most engineers prefer.

You can estimate how much money your game is likely to earn using the Beamable game revenue predictor.

Even before COVID-19 made social features indispensable, many game developers sought to add functionality to their games to support and encourage player socialization. However, many developers are often surprised to find how much time, effort, and funds are required to build social features from scratch. Adding these features starts off simply enough with a friend list or leaderboard, but add in guild play or any form of event, and suddenly seemingly simple features impact the ability to work on other features, which could delay your release date.

Fortunately, tools to support the inclusion of social features are rapidly improving. For example, Beamable offers a wide selection of easy to integrate pre-fabs, including:

As such, developers looking to free up resources and/or reduce costs have very good build versus buy alternatives for social features.

A game is only profitable if you can recruit and retain players at scale, but too many game developers fail to consider or integrate comprehensive acquisition and retention strategies into their overarching game plans until the later stages of the development process.

While the “build it and they will come” approach to player acquisition and retention may have worked in the very early days of mobile gaming, there are now approximately 980,000 games in Apple’s app store. As such, game developers that wish to effectively reach potential players, build a loyal fan base, and monetize their games need to seriously consider how they will do so early on in development.

In the highly competitive mobile game industry, many game developers make the mistake of over-optimizing their monetization features at the expense of player engagement, attention, and retention. Your monetization strategy needs to seamlessly integrate into your game and follow player focus instead of demanding it. This more subtle approach means that players are more likely to make IAPs (in-app purchases) and less likely to feel like a game is prioritizing monetization over player experience.

Increasingly successful game developers are choosing to partner with companies like Beamable that offer commerce as a service. This approach allows your game studio to offload more routine tasks such as in-app purchasing and inventory management, freeing up your top development talent so they can focus on creating compelling game content and best support long-term gameplay and company goals.

As noted in this article, Beamable can help game studios by offloading many dull and taxing tasks such as monetization, developing social features, and ongoing game support to an experienced external team. This partnership allows your internal development team to focus on the exciting tasks that support the creation of compelling game content that make your game unique, exciting, and fun to play.