Why do Indie Games Fail? Three Ideas From Reddit

Why do Indie Games Fail? Three Ideas From Reddit

A Golden Era of Gaming

We are all living and playing games in a time when independently created video games are receiving the recognition they deserve. As the overall gaming market grows, the rising tide is lifting all boats.

The democratization of tools for creating and distributing games and content are accelerating, opening the doors for anyone with an idea and a drive to design, build, and ship a game. More games means more players, and more players means more game creation. It is a feedback loop that is powering the industry to new heights. From single developers building out of their bedrooms to independent game studios bankrolled by VCs and publishers, game development is booming.

Despite all this creative energy, it is still far too common to find studios popping up and shutting down. Why does this happen?

We spent some time looking around on Reddit asking this question. Reddit carries a huge community of indie game developers sharing their successes, but also their frustrations. We assembled some of the perspective here for you in the hopes that it is helpful.

The Dawn and Rise of Indie Gaming

In prior decades, commercially successful video games remained the province of large, multi-million dollar corporations. Building and distributing a game was complicated and required huge investments in time, money, and logistics. Every game had to be created and tested to absolute perfection, then turned into a hardware cartridge or media with designed packaging and distribution contracts at retail stores across the country.

As player expectations continued to increase with the advancements in PC and console tech, the entire industry was soon dominated by a few AAA companies.

Once the internet became popular, things started to shift. Connectivity opened up new opportunities to collaborate, pool resources and ideas, and distribute software without the need for expensive retail channels. Shareware came about. Online payment gateways. Game production costs started to drop along with the cost of reaching players. Soon indie game makers could build a game, and distribute it for free all around the world. Massive successes like Minecraft burst onto the scene, fueling the dreams of indie devs everywhere! Build a game in your basement and make billions!

Since the early 2000s, the non-industry developers (indies) have grown into a huge community. Indie developers trade ideas, share insights, discuss code, and provide important critique through various forums, chat, and streams. The indie community continues to organize events in a golden era of small teams building and distributing incredible player experiences directly to gamers around the world.

Why do Indie Games fail?

With all of this opportunity and success, it still is far too easy to spend years building a game that no one plays. Spend any time searching Reddit and some of the first results around Indie Gaming projects are pretty gloomy! 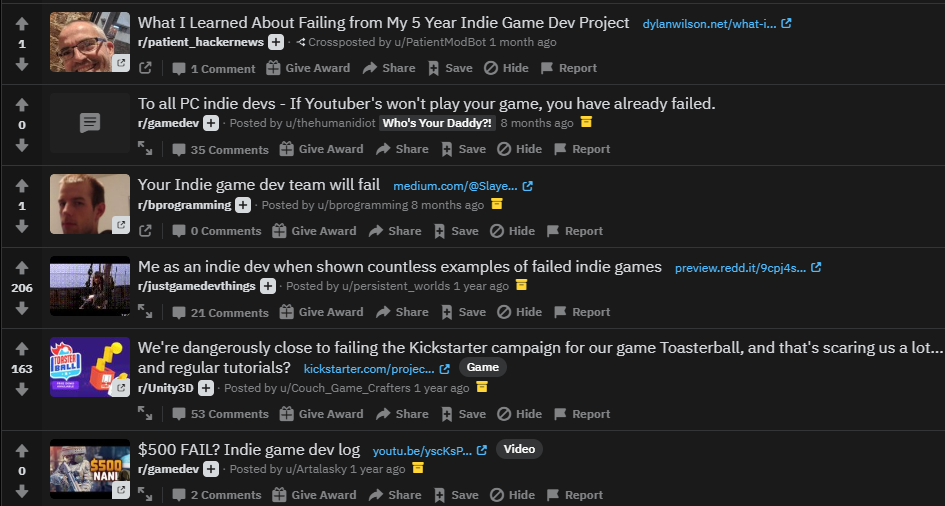 Reddit remains an important way for indie game developers to connect to connect and communicate with each other, sharing successes and asking for help navigating failures. Some of the most recurring keywords relevant to indie gaming that show up on Reddit continue to be about “Indie game dev failure”.

So, how does failure happen? There are many reasons, but here are some common ones, according to Reddit:

1. A failure to understand the power of marketing

It can’t be stressed enough that a huge component of game success is dedicated and continuous sales and marketing. You have to start early before development, continue during development, and pile it on after launch. The majority of games simply never reach a large enough audience to make them sustainable.

MeaningfulChoices, an active Redditor on r/gamedev had this to say: 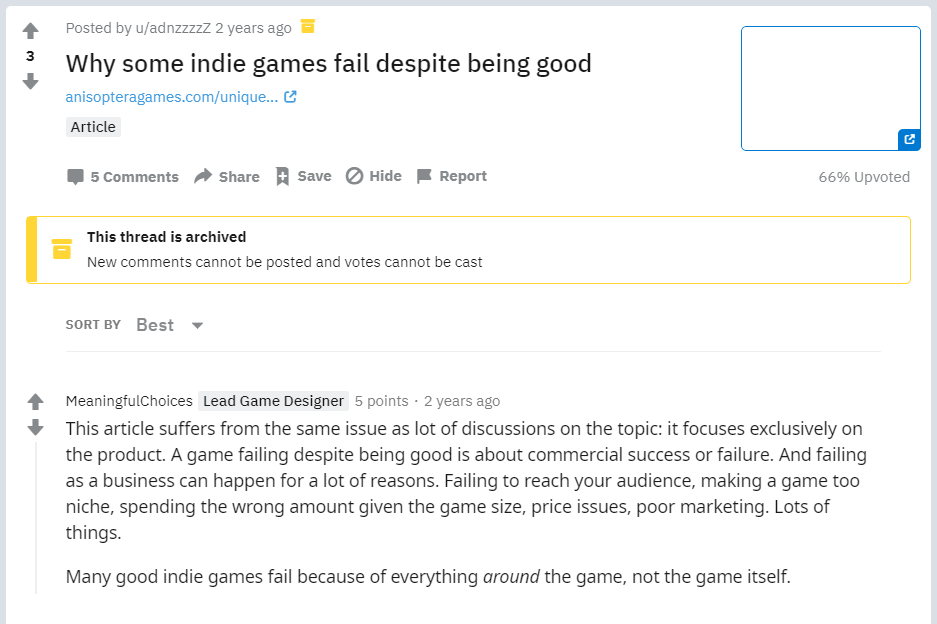 “A game failing despite being good is about commercial success or failure.” She further adds that failing as a business can happen for a lot of reasons, the first of which is failing to reach your audience. Your game can be a critical success (players love it), but if you can’t reach an audience, the game won’t sell.

Early on, when access to players was opening up in the app stores and there were fewer games in the market, it might have been easier to reach an audience. But it is a crowded market today with hundreds of games being released each week.

Try and think at least every day that you work on your game about how you will have 1000 people buy it on day one. A good game with 1000 dedicated fans has the opportunity to be a huge success.

2. Not recognizing the power of game influencers

There is a developing opinion on Reddit that online streaming and video content in gaming is becoming a core way to solve for #1 and reach an audience. YouTube and Twitch (and now TikTok) are powerful channels for indie game marketing.

To take full advantage of these channels, games must support the capture and easy sharing of video content to support the streaming context.

The heading of a post on r/gamedev by an insightful participant read, “To all PC indie devs – If Youtuber’s won’t play your game, you have already failed.” The post said that the influencers in the gaming industry represent the gaming population and must be looked at as your core demographic.

The post further mentioned that the common feature of indie game successes of the past decade was that the YouTube gaming influencers loved playing these games. 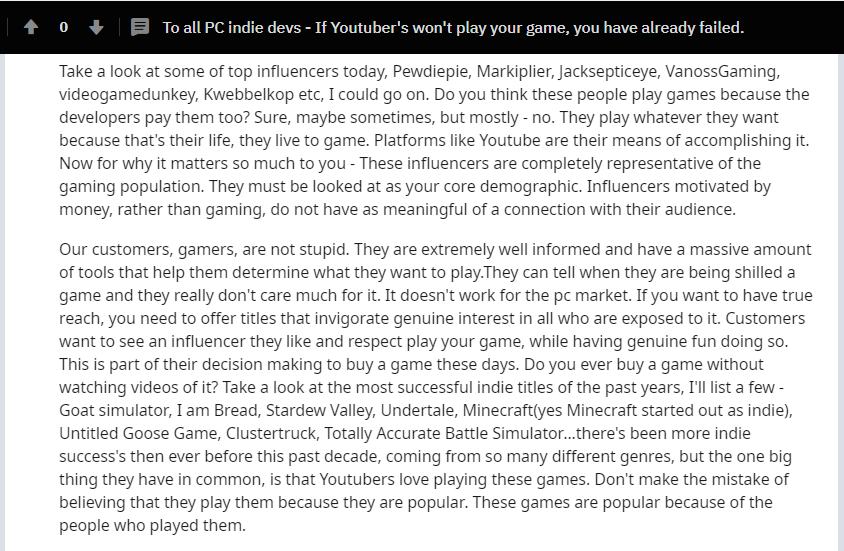 Many influencers make it a core part of their programming to try and promote new indie games. Everyone wants to be the person who finds the next major gem. The more your game is optimized to be found, played, and shared in the streaming channels, the higher your chance of success might be.

Nothing sets a player off more than bugs in a game. A robust QA/testing routine can make sure that your independent game is problem free.

Quality is always a struggle for Independent game developers, but it can’t be avoided. As pointed out in this Reddit post, test early, test often, and develop a scalable and repeatable process to ensure adequate test coverage. The gains will be substantial. 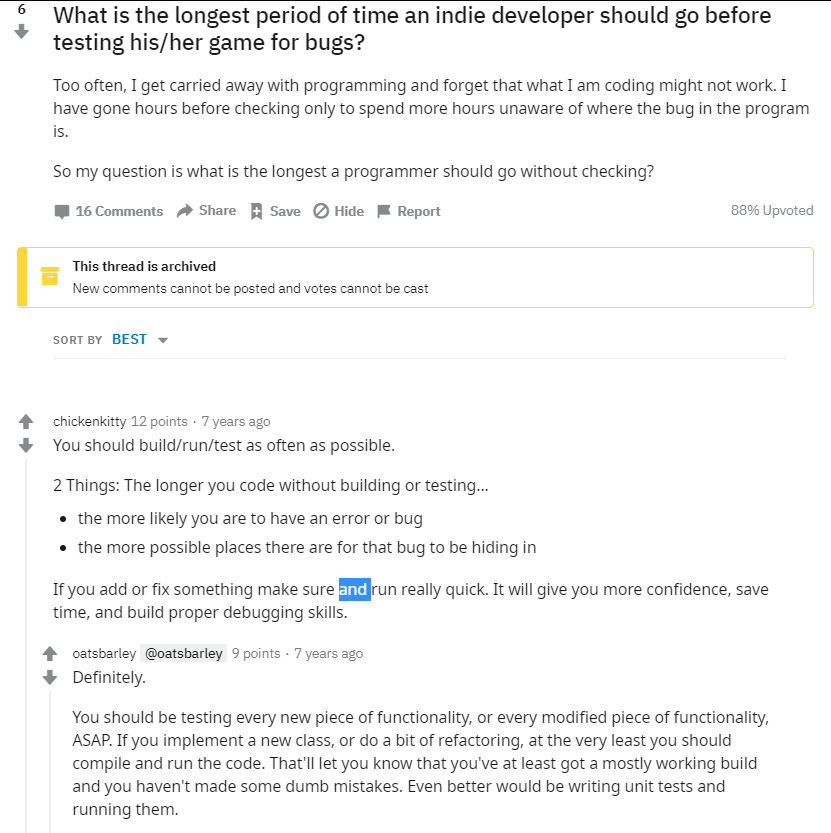 The path to a successful Indie Game is paved with failures. A crowded market has created an imperative for strong marketing strategies that embrace streamers and game influencers, and provide a bug-free and engaging play experience.

By providing some of the ways games fail, we hope you can navigate a path to success through the challenging but fulfilling world of Indie Game Development.

At Beamable, we fight for the game makers every day helping them build, deploy, operate, and scale their games into sustainable businesses. If there is anything we can do to help you, please reach out today!